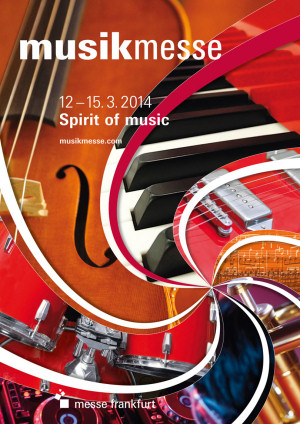 Musikmesse – the next meeting place for the musical instrument industry in March 2014, a month earlier than usual

The preparations for Musikmesse, International Trade Fair for Musical Instruments, Sheet Music, Music Production and Music Business Connections, are already in full swing because the world’s biggest trade fair for the musical instrument sector will be held a month earlier than usual, from 12 to 15 March 2014. On show will be more than 30,000 musical instruments, from small bells to imposing grand pianos, as well as a vast range of accessories and everything revolving around the subject of music marketing and services for musical instruments and sheet music.

Musikmesse – the next meeting place for the musical instrument industry in March 2014, a month earlier than usual

The preparations for Musikmesse, International Trade Fair for Musical Instruments, Sheet Music, Music Production and Music Business Connections, are already in full swing because the world’s biggest trade fair for the musical instrument sector will be held a month earlier than usual, from 12 to 15 March 2014. On show will be more than 30,000 musical instruments, from small bells to imposing grand pianos, as well as a vast range of accessories and everything revolving around the subject of music marketing and services for musical instruments and sheet music.

As in previous years, the whole world of musical instruments will be represented at Musikmesse 2014. Thanks to the high degree of internationality on both the exhibitor and visitor sides, Musikmesse guarantees optimum contacts between dealers, manufacturers, distributors and consumers. In 2013, 1,370 exhibitors from 51 countries presented their products and services to some 71,000 trade visitors from the industry, trade and distribution, as well as music aficionados.

Musikmesse also opens its doors to the general public on the Friday afternoon and the Saturday. This gives lay musicians and families the chance to handle, hear, marvel at and experience the complete spectrum of musical instruments. Moreover, they also have the chance to take part in some of the 1,000 events, e.g., concerts, awards ceremonies, workshops, music sessions, autograph sessions and product presentations. Visitors can take advantage of all this live and at the same place.

Hall occupancy in 2014
The layout at Musikmesse remains nearly unchanged: woodwind and brass instruments are in Hall 4.1, right next door to Hall 3. String instruments are to be found in Hall 3.1, in the immediate vicinity of sheet-music publishers and acoustic guitars.

Also in Hall 3.1 are instruments for musical instruction: percussion and accessories. A small change has been made in the case of harmonica instruments, which are back in Hall 3.1.

Electric guitars and basses with accessories are located in Halls 4.0 and 3.0. The Musikbiz area and its exhibitors are in Hall 5.1 while the Musikbiz Lounge & Congress can be found immediately in Hall 5._B. Bigger this year is the world of pianos with upright and grand pianos and historical keyboard instruments. They are positioned in Forum 1 and, once again, Hall 5.0.

Musikmesse – the event
Musikmesse is not only a business platform but also a music event and attracts both trade and private visitors. Following the great response in 2013, Musikmesse 2014 will once again open its doors to private visitors on the Friday afternoon, from 14.00 hrs on 14 March.

This change and special ticket offers are aimed primarily at school children, Students and private individuals who want to attend the fair on a weekday. As always, the general public can gain admission to Musikmesse on the Saturday (15 March 2014) when they have the opportunity to make direct contact with manufacturers and try out musical instruments for themselves. On the Saturday, Musikmesse is distinguished by a multi-faceted programme of events with concerts, workshops, autograph sessions and product presentations. Moreover, the ‘star density’ on the Saturday is even greater than on normal trade-visitor days. Many international and national stars make presentations on the Musikmesse stages and demonstrate their skills and the latest product innovations on the stands of many exhibitors.

Awards ceremonies and events
In addition to providing a comprehensive overview of the sector, Musikmesse is an extremely popular event for the presentation of awards for products and the people ‘behind’ the products. The Musikmesse is opened with the PRG Live Entertainment Award, which focuses on the doers behind concert tours and stage shows. During the glamorous evening event in the ‘Festhalle’ of Frankfurt Fair and Exhibition Centre, the stars on the stage present awards to the people who make it all possible.

Promoting young people
Musikmesse helps promote music making and education among young people with a number of activities. One of the events in this segment is Music4Kids. This participatory exhibition, at which children can try out musical instruments and acoustic installations for themselves, offers an active introduction to music making and the world of sound. Music4Kids, which has developed into the world’s biggest event of its kind with around 10,000 children a year, will open its doors to school classes and kindergarten groups on 10 March 2014. Music4Kids is open for trade visitors on March 12, 13, and 14. All Musikmesse visitors can see Music4Kids for themselves on the Friday Afternoon and on Saturday when the fair opens to members of the public.

An event for more ‘advanced’ youngsters is the final round of the SchoolJam competition in which school-student bands perform for the title of ‘Germany’s Best School Band’ on the Saturday of the fair. On a professional stage, the eight finalists have to demonstrate their abilities to a jury made up of musicians, journalists and other experts from the music sector.

The entire music value chain at the same place
In five exhibition halls, Musikmesse presents instruments, accessories and services for the music sector. With everything ranging from classic instruments, acoustic and electric guitars and basses, amplifiers, brass and woodwind instruments, percussion and keyboards to electronic equipment, computer hardware, software and harmonica instruments, as well as sheet music, specialist literature, services for music-marketing and sales, musicians’ platforms, content aggregators and courses of instruction for musicians – Musikmesse covers the complete spectrum from the idea, via making music, to listening to music on records or on the internet. In other words, Musikmesse visitors can discover the entire value chain from instruments and sheet music to labels and music marketing and sales.

Musicbiz Lounge & Congress
With seminars, lectures and matchmaking events, the Musikbiz Congress offers a variety of opportunities to find out about new music-marketing options, the rights business and copyright issues.

The Musikbiz Lounge is the main meeting place where music-industry exhibitors make their presentations and visitors have the opportunity to exchange ideas and information in a relaxed atmosphere. The Musikbiz Lounge & Congress area is located in Hall 5.1_B and will be open on all four days of the fair in 2014.

Musikmesse and Prolight + Sound held concurrently
For many products and services, there is no longer an unequivocal boundary between consumers and professional / rental users, especially in the fields of studio engineering, studio software, microphones and effects. These products are used both in home and professional studios. Account has been taken of this situation by holding Musikmesse concurrently with the Prolight + Sound trade fair.

Members of the public (Friday afternoon and Saturday)

More information and reproduction-quality photographs can be found on the internet at www.musikmesse.com.