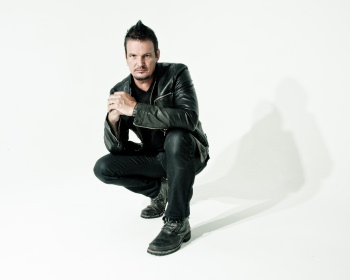 Dan Donegan, a GHS String endorsee for more than ten years, uses a custom set of GHS Strings’ legendary Electric Guitar Boomers. The bright tone and powerful attack of the Boomers are perfectly suited to Dan’s multi-faceted style of playing. His Rocktron Banshee 2 forms part of the infamous collection of effects which the rest of the band affectionately refer to as ‘The Danny Donegan Orchestra’! The Banshee’s high-gain preamp and focused tone control allow Dan to play many of Disturbed’s well know tracks with excellent enunciation and sustain.

John Moyer, uses the ever popular GHS Strings Bass Boomers. Their extra core strength for durability and nickel-plating makes them warm and punchy, complimenting his aggressive picking style and effortlessly bringing out his hard hitting bottom end to round out his signature sound.

The Grammy nominated multi-platinum-selling hard rock band Disturbed, currently on tour in Japan and Australia, are due to be in the UK and Europe this coming year. They are touring with their sixth album, Immortalized, on which their celebrated cover of the Simon and Garfunkel hit, Sound Of Silence, appears. An unlikely hit, Sound of Silence peaked at No. 42 on the Billboard Hot 100 chart, a career high for the band. As of the summer of 2016, the single has sold more than one million digital downloads and had been streamed over fifty-four million times.