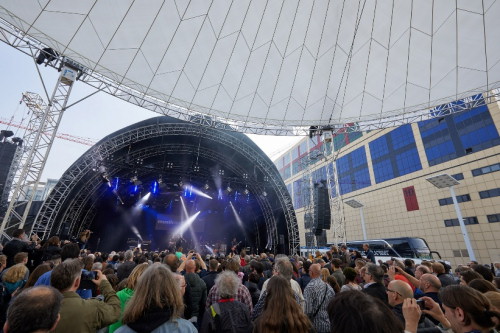 Musikmesse 2017:
visitors from 119 countries at the international meeting place for the sector
Increased levels of satisfaction provide the basis for the future

Retailers, manufacturers, distributors, representatives of trade and industry and musicians and music fans from all over the world came together at Frankfurt Fair and Exhibition Centre from 5 to 8 April 2017. 56,700 visitors from 119 countries attended the event to discover the latest developments in the market, make contacts and participate in the extensive programme of events.

Musikmesse 2017:
visitors from 119 countries at the international meeting place for the sector
Increased levels of satisfaction provide the basis for the future

Retailers, manufacturers, distributors, representatives of trade and industry and musicians and music fans from all over the world came together at Frankfurt Fair and Exhibition Centre from 5 to 8 April 2017. 56,700 visitors from 119 countries attended the event to discover the latest developments in the market, make contacts and participate in the extensive programme of events. “The musical-instrument market continues to be in a state of transition. We reacted to the changing circumstances with an optimised concept for the fair and are now continuing on this track. The echo from representatives of the various segments at the fair, as well as from our visitor and exhibitor polls, indicate a significant qualitative increase compared to last year. Moreover, we were able to reinforce the synergistic effects with Prolight + Sound by modifying the sequence of days. As expected, the discontinuation of the Musikmesse Sunday led to a decrease in the number of private visitors. Accordingly, one of our goals for the future will be to make visiting the fair more attractive for music aficionados on the Friday afternoon and Saturday. Overall, we draw a positive conclusion and will continue to work on a future-oriented trade and marketing platform in close cooperation with the exhibitors and associations”, says Michael Biwer, Group Show Director, ‘Entertainment, Media & Creative Industries’ at Messe Frankfurt Exhibition GmbH.

972 exhibitors presented their products to an international audience of visitors. After Germany, the top visitor nations included the Netherlands, Italy, France, Switzerland, Belgium, the United Kingdom, Austria, Poland, Sweden and China. Additionally, over 20,000 music fans attended the events of the Musikmesse Festival, an integral part of the Musikmesse concept, with concerts by over 50 national and international artists, including Extrabreit, Oleta Adams & hr-Bigband, Till Brönner, Steve Stevens & Band, Branford Marsalis Quartet featuring Kurt Elling and many others, at venues throughout Frankfurt.

MI associations see Musikmesse on the right track
To increase value added for all groups of visitors, Musikmesse was supplemented by new attractions and an expanded complementary programme of events. Together with the Musikmesse Festival, the fair offered over 1,000 events, from concerts and live performances to workshops and masterclasses. The echo from the sector was positive: “The Society of Music Merchants (SOMM) welcomes the comprehensive and on-going restructuring initiated in 2016. Thanks to the new concept, I am confident that we will be able to achieve a great deal. Change is clearly in the air. For German, European and international companies, Musikmesse in combination with Prolight + Sound ranks among the most important tools for business-to-business communication”, said SOMM Director Daniel Sebastian Knöll.

Other associations are also taking a positive view: “We are very pleased with business at Musikmesse. I met numerous retail colleagues at the fair. The traffic of visitors in the halls was good and the exhibition stands always busy. The Business Academy, which we took part in for the first time this year, is on the right track. In a nutshell: the sector agrees with the changes made to Musikmesse”, said Arthur Knopp, President of the Federation of German Music Dealers (GDM). The significance of the fair was also underscored by Gerhard A. Meinl, Chairman of the Federal Association of German Musical Instrument Manufacturers (BDMH): “Musikmesse in Frankfurt is a must for the German and European music industry, especially those from East Europe. We appreciate the high degree of internationality at the fair. We need this market place and hope that numerous market participants will use it in the future because this is the key to a thriving fair – on both the exhibitor and retailer sides.” This opinion was seconded by CAFIM President Claudio Formisano, “The Confederation of European Music Industries stresses the relevance of Musikmesse as the most important event for the MI in Europe. It is indispensable, today and in future, both from the point of view of business and also of education and culture.”

Innovations at Musikmesse 2017
As always, the Musikmesse exhibitors demonstrated the innovative dynamism inherent in the sector. Clearly visible was the trend towards using new materials and production methods. Against the background of the exacting requirements of the Convention on International Trade in Endangered Species (CITES), a new thermos-energetic process was shown that makes it possible to use domestic woods for high-grade instruments. Also to be seen was the world’s first violin made with the aid of 3D printing technology. Moreover, more and more manufacturers are using carbon fibres to make musical instruments. Other companies are banking on the interaction of instruments and mobile devices, for example, to help people learn playing techniques. Also popular are hybrid instruments that combine the appearance and touch of analogue instruments with digital sound production.

Leading exhibitors underscored the relevance of Musikmesse for the sector: “Here, we make the most direct connection between us and the people who buy our products and I have even been able to beat my personal visitor targets for the fair. We are planning to take part again next year”, said Chris Martin, CEO, C.F. Martin & Co. Extremely pleased with the course of business at the fair was Alessio Gerundini, CEO of Italy’s long established Zero Sette Accordion Factory. He said, “This year’s event was the most exciting Musikmesse for many years. We had a large number of visitors from the first day. Both the quantity and quality were spot on. We made many new contacts and welcomed visitors not only from all over Europe but also from Asia and South America. This year, everything was perfect.”

Dietmar Schuh, proprietor, Franz Sandner & Co, also praised the high degree of internationality at Musikmesse: “For me, the most important aspect is that I get to see my overseas customers. Within four days, I had the chance to speak to partners from Korea, Japan, Australia, Canada and the USA. As the international fair for the sector, Musikmesse is the number one for me.” Ruud Corstjens, Marketing and Artist Support, Adams Musical Instruments, summarised saying, “We were very satisfied with Musikmesse 2017 and had a great show! We continuously had a lot of visitors at our booth including a lot of trade visitors in the first three days. We did really good business and it was absolutely amazing to meet so many musicians!”

Praise for the extensive complementary programme of events
An important aspect of the restructuring of the fair were experiential and educational formats, such as the Drum Camp launched in 2016, which featured performances and workshops by world-famous drummers. The concept resulted in the return of several renowned brands. “The Drum Camp was one of the reasons that we decided to exhibit at the fair again after a break of five years”, said Frank Boestfleisch, Product Manager of Sonor. “We were pleasantly surprised by the course of business at the fair and are delighted with the number of visitors.” The Drum Camp format was transferred to the guitar segment for the first time this year – with success. “We were very taken with the concept of exhibiting in the immediate vicinity of the Guitar Camp. With highlights such as this, the fair generates huge value added for visitors”, said Bastian Krämer, Marketing Manager of Meinl Distribution, about the Ibanez presentation at the show. No less than four concert stages provided the setting for appearances by national and international artists throughout the fair. And there was a festive mood among visitors to the Musikmesse Street Food Session between the stages on the outdoor area. The commitment shown by Messe Frankfurt struck a chord with many exhibitors: “The programme of events revolving around Musikmesse – in the exhibition halls, on the outdoor area with the food trucks and chill-out areas, as well as in the city – is simply tremendous. This was my 19th Musikmesse and I can say that we have never had so many visitors to our stand. I appreciate these developments and hope that more major brands will decide to return to the fair in the future – after all, the visitors want to see these brands. I would say that everyone who wasn’t here this year has really missed something”, said Kai Böckmann, CEO, Trius Music, Orange brand distribution.

Furthermore, the fair expanded its thematic spectrum to include subjects from the world of music therapy and teaching. For example, the German Music Therapy Society took part in Musikmesse for the first time and presented its ‘InstruMental Room’ where visitors could participate in interactive events, such as sound journeys and ‘DrumCircles’. At the new ‘Discover Music’ area, which was organised in cooperation with the Frankfurt Music Academy, visitors could explore the world of music making under expert supervision. “The children’s gleaming eyes spoke for themselves: with ‘Discover Music’, we have helped generate an enthusiasm for music making at an early age. And this was confirmed by both parents and teachers at the event”, said Stefan Zint of Frankfurt Music Academy.

To improve the business quality of the fair, Messe Frankfurt implemented a variety of measures designed to cut noise levels. For example, there were acoustic curtains between the individual product groups and sound-proof cabins for testing instruments. As last year, Hall 11.1 was reserved for trade visitors only and provided the ideal setting for presentations by exhibitors with a business focus. This exhibition hall was also a magnet for the musical instrument trade thanks to the Business Academy inspired by SOMM with expert lectures especially for professionals from the sector. “This was our first time in the B2B Hall and it was very good for us. Our primary aim was to make contact with retailers. In the event, we spoke with business partners from all over the world and found exactly the right people for our business. Although we are well established in the sector, it is always good to make new contacts – and face-to-face meetings are significantly more effective than emails”, said Stephen Wick, CEO, Denis Wick Products. For the specialist retail trade, Musikmesse was an international get-together: “I found it very good that all important people were there despite several smaller exhibition stands. Hence, the trip to Frankfurt was worthwhile for me and I had one good discussion after the other at the fair. As a networking platform, Musikmesse is unbeatable”, said Günter Zierenberg, CEO, Musik Produktiv. Martin Wiesenbauer, proprietor of Music World in Augsburg, confirmed the positive processes generated in the course of the reorientation: “The show continues to be an extremely important meeting point for our industry. This year, I got the impression that efforts are being made to create a magnetic effect with heroes, which still exist in our sector.”

Strong duo of events with valuable synergistic effects for the music and event sector
Musikmesse was held concurrently to Prolight + Sound, International Fair of Technologies and Services for Entertainment, Integrated Systems and Creation, from Wednesday to Friday – a day longer than in 2016. This turned Frankfurt Fair and Exhibition Centre into a get-together for the entire music and event sector and attracted around 100,000 visitors[1] from 144 countries. Altogether, 1,922 exhibitors[2] from 55 countries made presentations there.

Other events of the Musikmesse family: