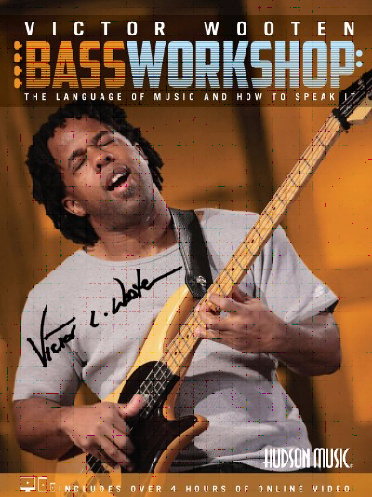 Part 1 of the book deals with many of Victor’s concepts and approaches and outlines his ten essential elements of music including such important and under-emphasized areas as emotion and feel, dynamics, tone, phrasing, leaving space, and listening.

Part 1 of the book deals with many of Victor’s concepts and approaches and outlines his ten essential elements of music including such important and under-emphasized areas as emotion and feel, dynamics, tone, phrasing, leaving space, and listening.

In Part 2, the lessons use music notation, tablature,and video footage to cover such key topics as warming up and hand-strengthening, tone, harmonics, thumb technique, tapping, looping, and soloing. This section is a more “how to” approach with hands-on demonstrations. Throughout, Victor underscores this vital material with a “groove first” ethic, as well an accent on being musical and creative—three mandatory ingredients to becoming a highly-sought-after professional bassist. All of which makes Victor Wooten Bass Workshop a must-have tool for bass players at all levels.

• Includes over 4 hours of online video.

• Includes instruction and a bonus chapter from Anthony Wellington

Regaled as the most influential bassist since Jaco Pastorius, Victor is known for his solo recordings and tours, and as a member of the Grammy-winning supergroup, Béla Fleck & The Flecktones.

He is an innovator on the bass guitar, as well as a talented composer, arranger, producer, vocalist and multi-instrumentalist.

But those gifts only begin to tell the tale of this Tennessee titan.

Victor Lemonte Wooten got to music early, growing up in a military family in which his older brothers all played and sang. By the time he was 3, Victor was being taught bass by his oldest brother Regi, and at age 5 he was performing professionally with the Wooten Brothers Band.

He recalls, “My parents and brothers were the foundation. They prepared me for anything by teaching me to keep my mind open and learn to adapt.” Working their way east from Sacramento, the band played countless clubs and eventually opened concerts for Curtis Mayfield and War.

Victor was influenced by bass mentors, Stanley Clarke, Larry Graham and Bootsy Collins, while learning about the music business at a wildly accelerated pace. By the early ’80s, with the family settled in Newport News, Virginia, the brothers became mainstays at Busch Gardens theme park in nearby Williamsburg, making numerous connections with musicians in Nashville and New York.