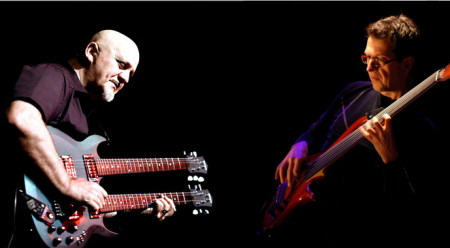 ALAIN CARON Bio:
Canadian bassist Alain Caron’s musical career began at the early age of 11 when he won an amateur contest, he soon joined some top 40 bands performing American, south-American and French standards. AT the age of 14 he discovered the music which would become his life’s passion – jazz.

Grammy winning guitar virtuoso, Frank Gambale, exploded on the L.A. scene in the early ‘80’s. His meteoric rise to fame is a testament to his passion powered playing – a style “Rolling Stone Magazine” calls “ferocious”!

ALAIN CARON Bio:
Canadian bassist Alain Caron’s musical career began at the early age of 11 when he won an amateur contest, he soon joined some top 40 bands performing American, south-American and French standards. AT the age of 14 he discovered the music which would become his life’s passion – jazz.

Opportunity knocked in 1977 when he met the Michel Cusson Group. Caron found himself in the company of like-minded musicians – who could appreciate jazz and its origins, as well as looking ahead to the future; they emerged in the early 1980s with super fusion group UZEB.

After moving to Montreal, still playing with UZEB, he started extensive studio work and also started playing quite a bit in jazz clubs in and around town. The self-taught musician took correspondence courses, and eventually, journeyed south to attend Berkley College of Music. While in Boston, he was quickly introduced to some outstanding young musicians, co-students, as well as, seasoned well established professional jazzman. Soon performing nightly, in the Boston area, with David Kikovsky, Tom Harrell, Sal Nestico, Frank Tiberi, Jerry Bergonzi, Bob Moses, to name a few.

Caron soon took off on his solo career, launching his own imprint NORAC RECORDS; In 1993, he produced the first of his 7 solo albums to date ¨Le Band¨ who won a Félix award for best album of the year then toured in Canada and Europe. ¨Rhythm And Jazz¨ ¨ was released in 1995 followed with ¨Play in 1997 and Call Me Al¨ in 2000.

Along the way, recording numerous albums with friends. ¨5¨ was released in 2003, and nominated for a Juno in the category best “CONTEMPORARY JAZZ ALBUM OF THE YEAR”

In April 2005, Alain Caron was invited by the prestigious WDR big band in Cologne, Germany to perform a series of concerts and recording directed by Michael Abene from New-York.

The DVD and double CD entitled “Live au Cabaret de Montréal” was released in 2006 and to commemorate UZEB`s 25th anniversary, CARON released on his NORAC LABEL the DVD UZEB ¨THE LAST CONCERT¨. The only official live concert footage ever released or to ever be released by UZEB. Featuring special guest TIGER OKOSHI on trumpet. CONVERSATIONS was released in 2007. a beautiful collection of duets with Oliver Jones, Lorraine Desmarais, François Bourassa, Jean St-Jacques and Otmaro Ruiz.

In 2010, he releases his seventh solo record, Sep7entrion. The city of Rivière-du-Loup announced that it would be building a music school and naming it “École de musique Alain-Caron”. The school will be inaugurated in 2011.

To this day, Alain Caron has released more than 20 records, solo or with the group UZEB and in collaboration or as a guest artist on more than 25 recordings. Winners of numerous prices including, 10 Felix, 1 Gemeaux, 1 Oscar-Peterson award. Alain Caron was ranked Best Bass player for 10 years in the row by magazine The Jazz Report.

Grammy winning guitar virtuoso, Frank Gambale, exploded on the L.A. scene in the early ‘80’s. His meteoric rise to fame is a testament to his passion powered playing – a style “Rolling Stone Magazine” calls “ferocious”!

Gambale is the undisputed genius who propelled sweep picking from a technique to an art form which continues to inspire generations of musicians. Jazz, rock, metal and prog artists alike are united in their awe of Frank as both an amazing technician and an unsurpassed musician.
As jazz legend, Chick Corea, describes Frank: “Everything you touch with your guitar turns gold – always has.” While John McLaughlin’s tongue-in-cheek response to his finesse is “I’d like to cut his hands off.”
A musician’s musician, gifted composer, brilliant innovator and author of numerous instructional books and DVDs, Frank continues to reach unprecedented sonic and technical heights. His six string prowess and seemingly limitless vision point towards an exciting future of ground breaking music.
Early YearsFrank Gambale was born into a family of talented musicians in his native Canberra, Australia. He quickly absorbed the pantheon of ‘60’s and ‘70’s rock guitar greats.
As a teen, Frank’s musical horizons expanded with the influence of jazz and vocal based music under the generous tutelage of a local import record shop owner. This led to nearly two full years of concentration on piano before digging back into guitar with renewed zeal.
In these formative years, Frank’s musical foundations became firmly rooted in three concepts:
– Sweep picking as the means to melodically play notes previously only possible on keyboard or saxophone- Continual study to deepen his knowledge and the ability to musically play through any chord changes- A desire to share his discoveries with other students and musicians
It was a leap of faith for Frank to leave for Los Angeles, to be in the middle of “where all the music I loved was being made,” and set off to the Guitar Institute of Technology in the early ‘80’s.
Meteoric RiseFrank’s shining prowess and dedication to practice garnered him “Student of the Year” upon graduation from GIT, landing him a four year teaching gig as well as a publishing deal for his first 3 instructional books and DVDs. His widening reputation led to an invitation by jazz legend Chick Corea to join his groundbreaking “Elektric Band.”
By the early ‘90’s, Frank had produced 8 critically acclaimed solo records, charting both in the U.S. and Japan concurrently enjoying a rich collaboration with Chick Corea resulting in 5 additional albums, 1 Grammy win and 2 Grammy nominations.
In addition, Frank and was granted a major endorsement by Ibanez and began to create the FGM series of guitars, which became a very popular series.

Fresh-faced Gambale graced the cover of “Guitar Player” magazine in June, 1988 entitled “Where Fire Meets Finesse”. Numerous publications and accolades soon followed. Fire meets finesse, indeed!
On the RoadFrank’s musical journey has taken him “at least twenty times around the world,” by his accounts, both as a solo performer and as a collaborator with “Vital Information” and several of Chick Corea’s bands.
25 years have produced over 20+ solo records, another 9 with his 16 year collaboration with Vital Information, 3 blazing albums with his off-shoot project, “Gambale, Hamm, Smith,” as well as dozens of other guest record projects. His fruitful 25+ year alliance with Chick Corea has totaled 6 recordings and a live DVD recorded at Montreux Jazz Festival.
World tours with drum legend, Billy Cobham, led to Cobham’s enthusiastic participation on Frank’s album, “Raison D’Etre,” which introduced Frank’s “Gambale Tuning System” to the world.
Nearly 40 years seeped in all things guitar, Frank discovered his revolutionary “Gambale Tuning.” This system aligns the chordal capabilities of piano onto a reachable and familiar fret board – yet another of his monumental contributions to the guitar.Yamaha quickly jumped in to arm Frank with a new double-neck guitar, necessitated by the quick change-over in tunings while flying on the new adventurous tracks.
Frank’s instructional materials are used in many schools and universities throughout the world. His mystifying sweep picking technique, featured in his first instructional book, continues to amaze and inspire guitarists. Frank generously conducts master classes around the world (and in three languages)!
New Directions 20112011 brings more terrific new directions for Frank Gambale that will delight dedicated fans and new audiences alike.
The all-star “Return to Forever IV” will ignite stages around the world starting in Australia, including a performance at the famed Sydney Opera House. The “Elektric Band” will celebrate Chick’s 70th birthday with a concert in New York City’s renowned Blue Note.
A brilliant new album recently released, “Natural Selection” reunites Frank with bass player, Alain Caron, and keyboardist, Otmaro Ruiz, in a tight knit, joyous collection of all acoustic tracks with a touch of percussion.
His newest release is “Soulmine” – a return to Frank’s vocal roots and the first collaboration with lyricist/musician and beloved wife and muse, BOCA. “Soulmine” features seriously catchy tunes punctuated with shining vocal harmonies, unexpected sass, funky rhythms and saucy guitar lines.
The delicious tones that tie the new tracks together are complimented by the combination of the new Frank Gambale DV Mark Signature line of amps firing up the incredible Gambale Signature FG1 Guitar by Carvin’s Custom Shop.
Whether Gambale is touring the world with his Fusion Jazz Trio, the Natural High Trio, his new vocal group Soulmine, or joining forces in an iconic jazz super group, Frank continues to amaze audiences around the world.