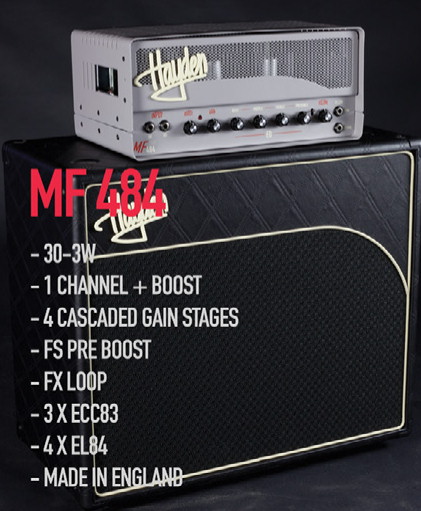 Hailing from Essex, UK, Hayden Amplifiers are a top name in valve amplification and are the suppliers of rich tube tone for musicians such as Simon Neil of Biffy Clyro, Jesse Hughes of The Eagles of Death Metal and British guitarist, Phil Hilborne.

Hailing from Essex, UK, Hayden Amplifiers are a top name in valve amplification and are the suppliers of rich tube tone for musicians such as Simon Neil of Biffy Clyro, Jesse Hughes of The Eagles of Death Metal and British guitarist, Phil Hilborne.

The Hayden team boasts the well known – if not legendary tube amplifier guru, Dave Green as their chief electronics engineer and amp designer. Dave has over two decades of experience in building quality tube amplifiers, having previously worked at Matamp, Orange and Hiwatt. Despite his long-standing success in the tube amplifier world, Dave remains a down to earth northerner who has been with Hayden Amps for 10 years. Hayden Amps are known for being a family run business and in keeping with this, Dave’s wife even works alongside him in Hayden’s UK Custom shop.

There is no doubting that Dave Green and the guys at Hayden Amplifiers’ UK Custom Shop have been busy over the last year, ready to spoil us with some brand new product lines at NAMM 2017. To put it simply, Hayden’s 2017 product guide is defined with three simple words. Class with Glass.

Hayden Amplifiers’ MF range is built on the solid foundations laid by its ancestor, the MoFo. For a decade, the flagship Hayden MoFo series paired classic amp construction and reliability and tone with modern build features and was designed for guitarists who seek ultimate power, tone and versatility in a small package.

New for 2017, Hayden Amps have retained everything that made the MoFo great and have re-launched and it with a slightly more inconspicuous name that fits in with Hayden’s more classy and established look. Biffy Clyro, The Eagles of Death Metal and many more artists were huge fans of the original Mofo range, using them both on stage and in the studio. The new range will appeal to an even wider range of guitarists than ever before. Hand built in England, the Hayden MF range has a whole lot of attitude. Available in the product line up is the MF-484 30-watt and the MF-284 15-watt amp heads. Unlike other mini guitar amp heads, Hayden’s MF range is definitely not a one trick pony.

The MF-484, featuring 4 x EL84 power tubes produces stunning bell like clean tones with real depth, to plexi-esque classic rock crunch, right up to full on metal mayhem. It’s littler brother with 2 x EL84 valves, the MF- 284 has all the same tonal capabilities and proves that huge tone and versatility can be found in small packages, providing enough power for small gigs and rehearsals.

You can still get those valves cooking on both heads when playing at lower volumes at home and in the studio thanks to the ‘Studio’ switch, which drops the output of the amp to just 2 watts, achieving a big tone at realistic volume – perfect for late night jamming without the neighbours shouting at you.

Portable yet powerful, the MF-484 punches way above its weight, with four cascaded gain stages and a foot switchable (included) boost for yet even more gain. Whilst the petite MF-284 makes it easy to find a sweet guitar tone via a simple formation of variable tone controls.

Versatility doesn’t stop with the tonal options. Integral handles and a padded carry bag means you can take your amp wherever great tone is needed. With both 8 and 16 Ohm speaker outputs, the MF-484 and MF-284 can both drive a wide range of cabinets. Hook the MF-248 with a 1×12” for a boutique studio set up or stick the MF-484 on top of two 4 x 12” cabs for an on stage rig.

Pair the MF series heads with Hayden’s new line-up of cabinets including the H-112 – 1 x 12” and H-212 – 2 x 12”, each hand built in the UK and loaded with Celestion Cream-back speakers. These rather special speaker cabs are specially designed to not only compliment the stylish looks of the matching amp head, but also praise the wide tonal possibilities and power of the Hayden guitar amplifier heads – delivering no compromises in terms of tone or performance. Both the MF-284 and MF-484 heads are constructed with a high quality steel chassis and finished in a cool grey finish.