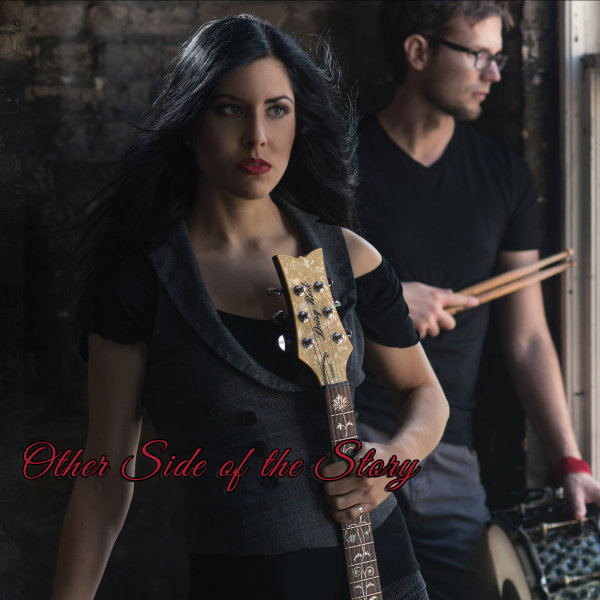 Acclaimed one of the Top #10 indie talents across Canada and the #1 local band in their hometown, Rose Cora Perry & The Truth Untold have quickly established a reputation for equally writing catchy songs and compelling audiences.

Named a “favourite” by media legend Bill Welychka (former MuchMusic VJ), in the short time they’ve been a band, they have already rocked audiences of over 200,000 and shared bills with 90s hitmakers SmashMouth as well as Canadian legends Platinum Blonde and Rik Emmett (Triumph).

Acclaimed one of the Top #10 indie talents across Canada and the #1 local band in their hometown, Rose Cora Perry & The Truth Untold have quickly established a reputation for equally writing catchy songs and compelling audiences.

Named a “favourite” by media legend Bill Welychka (former MuchMusic VJ), in the short time they’ve been a band, they have already rocked audiences of over 200,000 and shared bills with 90s hitmakers SmashMouth as well as Canadian legends Platinum Blonde and Rik Emmett (Triumph).

Rolling in the Deep

Marco Mammoliti – Your biography indicates that you were a “Performer since age four. Writer since age seven. CEO of Record Label & Publicity Firm at 15”. You have been heavily involved in the Canadian indie music scene ever since. Can we start out by saying that we have in front of us ‘Wonderwoman’?
Rose Cora Perry – Lol! Well I’m not sure I’m worthy of superhero status, but I appreciate the compliment. I come from a family with a strong entrepreneurial spirit so I was raised to follow my dreams and work hard if I wanted to achieve something. Honestly, what my parents have accomplished for themselves is absolutely incredible. I can only dream that one day I’ll be as successful.
My father is a two time World Champion in Powerlifting who still has undefeated records to this day and my mom has so many degrees following her name, I can’t even keep track. She’s considered one of the top fitness trainers in North America and has written for multiple print publications as well as had her own TV and radio shows.
Drug-free sports is their passion; drug-free music is mine 🙂

MM – Among the many things you do, you have volunteered your time as a Guest Speaker and Editorialist for a variety of Mental Health events and publications. This is a very noble act and it is the umpteenth thing you lend your time/talents to. Where do you find the time and energy?
RCP – I think it’s important for people to pursue their passions and interests in life and make time to do the things that they find fulfilling. Obviously, finding a balance is always necessary just as is never biting off more than you can chew at once. Mental health issues have only recently really started to be recognized by greater society as serious health concerns that can be debilitating to sufferers and those around them. I feel honoured to have been able to play (and continue to play) a small part in contributing to helping those in need have access to necessary resources, funds and services to be able to get help before it’s too late.
In my own life, I struggled tremendously with depression as a teenager and if it weren’t for music becoming a positive healing outlet for me, I wouldn’t still be here today. That’s why music is so important to me: it saved my life and I know it can and does have that same effect on others.
In other words, I make time for mental health (in my personal and professional life) because I recognize and appreciate just how important it is.

MM – You have been named one of the Top #10 talents in Canada. It’s not an everyday thing, is it?
RCP – Suffice it to say, I’m incredibly honoured to have such a title bestowed upon me and to be recognized for my contributions to Canada’s independent rock music scene. I’ve been involved in the scene since I was about 15 years old: from touring across North America to writing advice columns for fellow indies to booking/promoting concerts for other players as well as being involved in important non-for-profit causes. I’m both an active musician and avid music supporter.

MM – As a songwriter, what is your approach to constructing your songs?
RCP – I write when inspiration strikes and there’s really no rhyme or reason to it. Usually without any prompting, I’ll hear a melody in my head, followed by an idea for lyrics and then the song starts to take shape once I grab my guitar and chord out the arrangement.

I don’t try and constrict my songwriting to any formula or genre – it comes out organically in whatever structure it does and I allow myself to be influenced by a wide variety of genres.
I think the best art is genuine and full of feeling, rather than focused on “hooks” and “catchiness”. That’s not to say the two ideas cannot co-exist, but I don’t believe in writing a song to be catchy for catchiness’ sake alone.
Lyrically, I try to write songs that are relatable and raw: either about my personal life and experiences or societal events that really strike a chord with me. I tend to be inspired during darker moments of my life but always aim to leave listeners with a sense of hope that they too can overcome whatever it is they’re going through.

MM – As a performer when people come to see you play, what is it that you ultimately hope they will walk away with?
RCP – That live music is ALIVE and WELL and that there is something truly powerful to witnessing that experience in person.

MM – You are skilled at singing in any genre, are there differences in how you approach performing different genres?
RCP – Absolutely. Even within a single song, I may vary my tone and vocal technique in order to achieve a certain feel. Sometimes a song calls for more “attitude” or “grit”, while other songs may be more effective with “delicate” or “airy” vocals – this is where lyrics are critical.
I think in order to truly perform a song well and effectively, one must really understand what the song is all about and accordingly match how they’re singing it to what the song is actually saying.

MM – At home, do you ever listen to records you’ve played on?
RCP – I do – for a variety of reasons. Sometimes when I’m prepping for a gig, I’ll listen to a rundown of everything we’ll be performing that day to get me amped up. Other times, I listen to my past recordings with a more critical ear to hear how I can improve on future projects. And yet other times, I listen out of a sense of pride thinking, “wow – that’s me, that’s my art.” Honestly, there are songs I’ve written that I’m still surprised came from me. For lack of a better word, it’s pretty darn “cool”. Writing music and unabashedly bearing one’s soul with the world – to fans and critics alike – in my opinion is a courageous act. I feel very blessed that I’ve been given a musical gift and I take pride in how I’ve evolved as a songwriter over the years, always challenging myself to get better and looking up to all of the amazing artists that’ve come before me.

MM – What CDs are in your cd player?
RCP – The regulars include at least one album by Veruca Salt, Bon Jovi, Big Wreck and Aerosmith. I go through phases in terms of what’s on my playlist, but those are mainstays that’ll be with me for life.

MM – Can you tell us about some of your non-musical interests?
RCP – When I’m not on stage, honestly my personal life is pretty low key. I enjoy spending time with my partner, my bratty cats and being out in nature. I am also an avid action movie buff. Truly, I’ve seen pretty much everything Arnie and Bruce Willis have been in.

MM – Going right back to the beginning, how did you first get involved in music?
RCP – At age four, my parents enrolled me in classical vocal studies so I must have shown some sort of potential for music and performance at a very young age. My first ever “gig” was singing “Castle on a Cloud” from Les Mis at a vocal recital. I remember audience members being quite shocked by the power and presence I had already considering my young age and petite size. From there, I continued to study music for over a decade, earning my grade seven in vocals and grade two in theory rudiments. At age 15, I was performing “Think of Me” from Phantom of the Opera at a local talent show and it was there that I was recruited into my first rock band. Shortly thereafter, I began to teach myself guitar. I haven’t looked back since.

MM – In those early days, who were your biggest musical influences?
RCP – Sarah Brightman (the original Christine from “Phantom of the Opera”) and Canadian celtic singer/harpist Loreena McKennitt. In fact, those two remain my favourite singers of all time. I am wow-ed by both of them. Their voices are angelic.

MM – Tell us about your band’s new EP, “Other Side of the Story”.
RCP – Myself and my partner-in-crime/drummer Tyler Randall are super excited about, “Other Side of the Story”. It is our debut EP meaning it’s the first time our band’s “sound” has been captured on record.
For the past three years, we’ve been heavily touring in support of my sophomore solo album, “Onto the Floor”. For the purposes of performing the tracks on that album live, we came up with harder more rock’n’roll arrangements of the material. Accordingly, there has been a bit of a disconnect between how the album sounds vs how the band sounds, given that “Onto the Floor” was written from a singer/songwriter perspective. While audiences have enjoyed both interpretations of the material, we wanted to release a disc that really represents what we as a band are all about.
The EP features four of my original tracks reworked as The Truth Untold arrangements, along with a rock-i-fied version of Adele’s “Rolling in the Deep”. It is available worldwide, on all download and streaming platforms. It can also be purchased from us directly at: https://rosecoraperrykeepsakes.ecwid.com