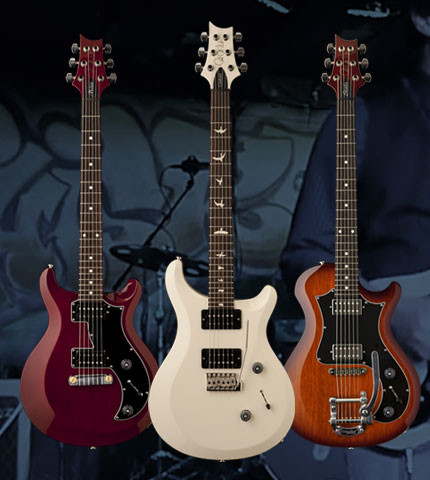 The S2 Story of the new S2 Series

Manufactured with new processes and specs in the same Maryland factory as all US-made PRS instruments, the new S2 Series brings classic PRS playability and reliability to a new price point. With a simple, straightforward design these guitars have serious style and expressive tone.

The PRS S2 Series offers the fit, finish, feel, and attention to detail of PRS craftsmanship in a straightforward design. Standing for “Stevensville 2,” S2 Series instruments are made at our Maryland shop blending new design elements and manufacturing techniques with practiced quality control and workmanship to create reimagined, fresh guitars that reach a more affordable price for players.

Whether the S2 Series means your first PRS or an addition to your arsenal, one thing is certain: each model in the PRS S2 Series is a solid American-made guitar that makes no sacrifice in playability or tone.

The Woods
Wood is the foundation of a guitar’s tone. If you sacrifice the foundation, there is little hope of achieving an exceptional instrument. Believing this, we have chosen the same traditional tonewoods that are used on PRS Core guitars, such as maple tops, mahogany backs and bodies, mahogany necks, and rosewood fretboards. While some of the design and construction methods used in the S2 Series (the neck blank’s starting dimension across the Series and the S2 Custom’s wood grade, for example) allowed us to use less expensive and more readily available woods, no compromise has been made to the tone or integrity of S2 instruments.

Pickups & Electronics
PRS S2 Series proprietary pickups are built to our exact specifications, including wire and coating materials, winds, and resistance. Whether harkening back to our original HFS and Vintage Bass pickups or designed to work with the unique tones of a Bigsby tailpiece, S2 pickups were designed to capture the distinct tonal character intended for each instrument in the series.

All of the models in the S2 Series feature a 3-way blade pickup switch with a master volume and a push/pull tone control. Coil-tap functionality adds versatility by allowing players to split the humbucking pickups into singlecoils, providing a vast array of tones. The jack assembly used on the S2 Series is the same jack as our Core line, providing a clean connection point to amplify your sound.

Necks
A guitar should be comfortable and feel familiar from the moment you pick it up, and the neck is paramount to that connection. PRS S2 instruments feature a 25” neck with scarf-joint construction and our Pattern Regular neck shape, which stems back to the PRS “Regular” neck shape found on guitars made in the late 1980’s in our Virginia Avenue Annapolis shop.

On the PRS S2 series, the neck begins with a quartersawn mahogany neck blank. That blank is cut, the headstock is scarfed, and the heel is built up using a plain splice. (A scarf joint is made up of two pieces of wood that are cut at complementary angles and glued together. A plain splice is a joining of two pieces of wood in the same line). These construction methods allow us to start with a smaller amount of raw materials, and the increased glue surface area results in a very strong joint. This technique combined with a pre-radiused, pre-fretted fretboard result in a very efficient, cohesive manufacturing process that creates a durable, comfortable, playable neck.

Tuners, Nuts & Bridges
The tone of a guitar is influenced by several factors: wood choice, body style, pickups, scale length, metals and other materials used, etc. Some of the most impactful components are those that directly affect the vibration of the strings: the tuners, the nut, and the bridge. This is because it is the strings’ vibration that the pickups sense and that creates the sound wave the ear will ultimately hear.

The bridge is the anchor of the guitar. It is here that the vibration of the string is transferred into the body of the guitar, bringing out the inherent tone of the woods chosen. Each S2 instrument features a different bridge style. The S2 Mira features the same stoptail that is used on Core PRS instruments. We use an unplated bridge with brass studs. The S2 Starla features a time-tested Tune-o-matic bridge with a Bigsby B50 tailpiece. The S2 Custom features a PRS tremolo (the same bridge found on our SE line of guitars).

The nut also plays a critical part in the transfer of tone. The nut on S2 instruments is the same nut we use on our Core guitars. The nut is strong and long-lasting without “grabbing” the strings, and it is imbued with brass, a highly musical metal.

Our PRS S2 locking tuners are used across the S2 Series. These proprietary tuners are reminiscent of our “Phase II” tuners and follow many of Paul Smith’s “tweaks,” including a brass shaft and specially-configured internal construction. The locking mechanism itself is identical to the one used on our Core guitars, which helps the guitar stay in tune.

Whether using parts shared by our Core manufacturing line or newly-sourced proprietary parts, we always chose to use musical materials (such as brass) and avoid materials that deaden tone (like nylon washers), maximizing the guitars’ overall resonance, musicality, and tone.

Finish
Finish should do three things: most importantly, it should enhance the tone of a guitar. It should also feel good to the player’s touch, and it should look good. The finish used on the PRS S2 Series accomplishes these goals by featuring a polyester basecoat and an acrylic topcoat (reminiscent of the finish system used on PRS Core guitars for twenty years – before the introduction of V12). We have updated the process of this finish system to allow S2 guitars to move through the finish hall smoothly and quickly while also requiring a thinner topcoat for optimal tone. This old-but-new finish maintains a hi-gloss, attractive aesthetic, and the translucent and opaque color options offer vintage and modern flavors that allow players to choose the look that fits them best.

Other Appointments
When designing, sourcing, and building the S2 Series, we were encouraged and excited to build quality instruments that were both inspired by our Core line but also truly new for PRS. We believe this is evident in every detail. If there was a time that we could not share a component with our current Core lineup, we set out to design a new process for ourselves or source new, proprietary components from our partners.

That said, the nut, jack assembly, fret wire, electronics knobs, and strings are all shared between our Core and S2 instruments. It is long-lasting and is comfortable to play. The electronics’ knobs are made in our own proprietary mold, which results in a handsome and ergonomic design. As with all of our solidbody guitars, we use PRS 10-46 strings. S2 Series guitars come in a nylon gig bag to make heading out for your next show that much easier.