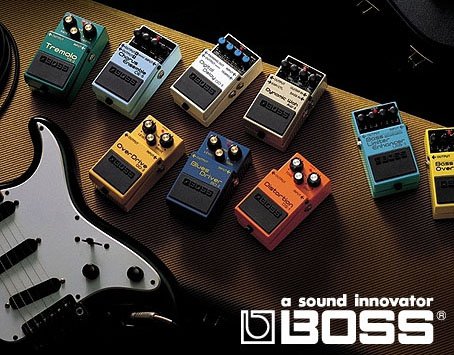 For this Musikmesse 2016 Boss has unveiled the RC-202, a two-track desktop loop station aimed at DJs, beatboxers and live performers, the VE-8 Acoustic Singer multi-effects pedal, the TU-3W and TU-3S tuners, and lots of pedal effects.

For this Musikmesse 2016 Boss has unveiled the RC-202, a two-track desktop loop station aimed at DJs, beatboxers and live performers.
Based on the larger RC-505, the 202 offers a similar interface and familiar functionality, but with some added features.

Again, during our booth tour, among many pedals, effects, and so on, we found the TU-3W and TU-3S tuners. The TU-3S is basically a smaller version of the original TU-3. It’s been designed for those who need to claim back as much space on the pedal board as possible. Boss say the pedal is essentially always on and so your guitar signal just feeds through it and allows you to check your tuning just by glancing at the readout on the top. It also features a power out for sharing power with other pedals on your board.

The TU-3W Waza Craft edition tuner follows the more classic design of the TU-3, retaining the pedal part. Here, however, the casing is black instead of white. The other difference, Boss say, is that this new incarnation has a ‘redesigned’ circuit with either a selectable buffered or a true bypass operation. They have made the signal path as transparent as possible.